For the last seven years, I’ve been researching, writing and photographing for a book.

It all started with an exchange on an international keyboard forum about the need for a publication on combo-organs: the portable, transistorized, stage organs that were all the rage in the 1960s. A chance connection with another keyboard enthusiast, Alan Lenhoff, a writer/newspaper executive living in Detroit, set the project in motion. (See the book at www.classickeysbook.com)

The theme of the book, keyboard sounds that launched rock music, came from a question I put to an Adelaide musician, Andrew Moncrieff, in August 2008, eleven years ago: What were the most significant keyboard instruments of the rock era? At the time, Andrew was my go-to-guy for new band gear at Derringers Music. I’d just taken over the keyboard role in an amateur cover-band, and realised I had very little knowledge of the historic keyboards of the early rock era. Andrew helped me get a list going, and in August 2009, I bought my first vintage keyboard, an eighty-eight-note, Rhodes Stage electric piano made in 1976. It was a closet treasure that had spent much of its thirty-year-life unused. It did not take much to return it to playable condition. So, my first plunge into the world of second-hand instruments was positive.

Early rock keyboards, stripped to the essence, can be said to belong to two groups: electric pianos, and electronic organs—percussive notes or sustained notes. This duality inspired the graphic for the cover of Classic Keys. I had my first electric piano, now for an organ. It wasn’t long before I’d bid for, and bought, a sample of the most-iconic early electronic organ—the Vox Continental. Only this time, it wasn’t a relaxing drive to Gawler to pick it up. Vox Continentals are hard to find in Australia, so I’d bid on one from Vox’s home town, London. With the help of the relatively patient seller, I navigated the pitfalls of international airfreight, and many days later took delivery of a road-worn, heavily-gigged Continental.

This, of necessity, led to keyboard restoration. Vintage keyboard collecting has many facets. For some, it’s simply making use of the instrument in the condition they find it. For others, the aim is to get the instrument back-to-new sonically. For a smaller group, it’s returning the keyboard to its as-new state. The Vox Continental became my first full-restoration project. The results can be seen in the book. 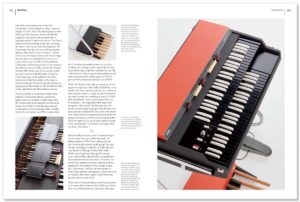 This Vox Continental also made me eligible to hang out on the Yahoo Combo-organ forum—both the source of the combo-organ book idea, and the place that Alan and I hooked up to make it a reality. Alan was a vintage-keys blogger, with posts about his keyboard restorations that I’d read for tips with my restoration project.

There is a great deal to interest an industrial designer in early rock, vintage keyboards. The instruments have a variety of sound-making technologies, from mechanical to electronic. They bridge the era of electronics development from thermionic valve circuits, to discrete transistors, through to ICs (integrated circuits). They also reveal the changing materials and technologies of mid-1900s manufacturing, with the steady replacement of wood with sheet-metal and plastics components.

Mid-twentieth century keyboards are usually heavy, and take up a great deal of space. The pleasure of collecting them is tempered by the available space to keep them. In part, the production of Classic Keys was a way of capturing the progress of a collection that would eventually have to be dispersed again in the not-too-distant future, just as Alan’s vintage key blog captured the progress of his collection. The book became a detailed photographic record of my collection, but the collection and restoration priorities were increasingly driven by what we needed to complete the book.

Our original plan for Classic Keys resembles the finished product. The core of the book is a dozen chapters that feature the story of each of the best-known instruments that produce the significant signature keyboard sounds of the rock era. But the scope of the supporting material continuously grew over the seven years of preparation, with the book more than doubling in page count from its conceptual layout in August 2012, to delivery to the printer in August 2019. The end result is a book that describes keyboard instruments from their inception in antiquity, to the advent of micro-processor controlled, digital instruments in the 1980s.

Included in the book are discussions of the technologies that created the environment for amplified rock music, the social and economic climate, and the published and broadcast media that both enabled and chronicled its progress. The evolution and international movement of the piano industry is referenced, and then the subsequent shifting fortunes and locations of electric and electronic instrument manufacture. Classic Keys provides a reference framework for understanding the history of keyboard instruments into the electronics age. 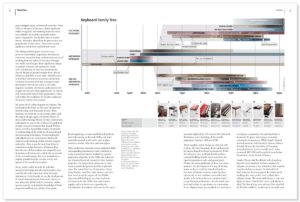 Alan and I divided up the writing tasks at the beginning of the project, with Alan taking the lead on the classic American instruments, such as the Hammond organ, Wurlitzer electronic piano, and the Rhodes pianos. I took on the German and Japanese instruments that I’d had more exposure to in Australia, and also took on the historic chapters that set up the reference framework for the book. Custom high-resolution photography was a foundation element for the success of this coffee-table book. And it was also something that I was keen to undertake. After years of commercial photography for client projects, I was looking forward to publishing a photo essay of my own devising. But the significant downside was that I needed to get access to (or purchase) each of the essential instruments in Australia—no casual task.

A snapshot of keyboard communities

In the making of the book, Alan interviewed and involved many people in the vintage keys support industry in the US, and numerous contemporary musicians and specialist collectors. So Classic Keys progressively became an historical snapshot of the social and commercial communities that have formed around early rock keyboard instruments. The ever-growing network of contributors to the book meant that we got access to instruments and collections that would otherwise not have been included. Had we known all these people before we started, the book may have evolved differently, but it was never intended to be a catalogue of every instrument from the era, and the number of instrument models produced in that thirty-year period was so numerous that the resulting book would only have interested a rare few.

Despite the broad nature of the content in Classic Keys, and its potential interest to musicians, social historians, instrument collectors, museum curators, and music educators, it still represents a niche interest publication. So, when we went looking for a publisher, starting in May 2017, we rapidly learnt about the constraints of the book publishing world in the digital era. Because we were designing and assembling the book as we went, we were able to provide potential publishers with a highly visual synopsis of what the finished product would be. This approach helped to have the book at least considered by a number of publishers.

We got a few nibbles, and dozens of knock-backs from publishers throughout the US (the book’s largest potential market). The University of North Texas has a high-profile music faculty, and their press has a special interest in books about music. It was a leap of faith for editor Karen DeVinney to champion our book to their editorial board. A large-format, photographic, coffee-table book is a much more expensive product than most publications to get to market. But it clearly had the potential to be a long-term show-piece in their catalogue. Pre-contract reviewers were enthusiastic about the need for the book, and its quality. A contract was signed with UNT Press in May 2018, one year after starting the search for a publisher.

The path to publication for a complex, research-based book, such as Classic Keys, is a slow journey. But the signing of the contract set in motion a year of intense activity to complete the writing for the book, the photography, the design and assembly, and come to grips with elements such as the detailed index the book required. Last-minute instruments were shipped from the US and photographed. Numerous historic images were sourced or confirmed. Research that had been ongoing over the first six years of the book needed to be brought to a conclusion. By early April 2019, the 160,000-word text had been edited by UNT and the final assembly began.

The book contains 560 photographs and illustrations, all of which had to be selected and edited from the thousands of images taken and sourced during the project. The book layout allows for lengthy explanatory captions that resulted in the writing of an additional 20,000 words during the assembly process. And, annoyingly, new information kept finding its way to us. But, ultimately, the labour of love had to be brought to a close. On the 21 August 2019, seven years after making a start, Classic Keys went off to the printer.